Been busy the past two weeks of the holidays/special term doing various filming stuff in nuSTUDIOS.

(Before the filming stuff started, I went for the CFA Retreat at Chevrons. It was meant as an introduction of CFA to the new excos. It was a long workshop-filled day, and the best part was the food provided, especially the pool-side BBQ at night. We kept eating and eating! Haha.)

The first one was Microsoft Imagine Cup Short Film Competition. A month or two back, Sabrina and I decided to give it a shot and submitted a simple storyboard. We got through the first round and now we are supposed to create a 3 min short film based on our storyboard. The theme for this year’s competition is “Imagine a world where technology helps solve the toughest problems facing us today”. Our story was about solving the problem of hunger, and our technology is some form of wireless transfer of money (e.g. ez link) which allows people to buy meals for someone across the world by buying a meal one-for-one.

And so, I got my cousin Dave, and my tutorial mate Siying to help me as the cast. We filmed everything all in one day last last Friday. It was also my first time using the Brevis/RedRock Micro camera rig, and I spent a few hours configuring and playing with it the day before. Took me a while to figure out how to align the lens. The results were fantastic and SLR-like quality. Not much colour correction needed! We filmed the “rich person” part in the Arts Canteen, and the “poor person” part right in our own studio room. Check out our set! : 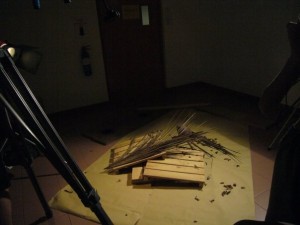 It was a pretty fun day, and even though there were not much people helping us. However, in the studio, vic, yishu and zy managed to give us a hand in setting up the lights etc. After the filming, I came back on Saturday to edit. Added the music on Tuesday and the finishing touches on Wednesday before submitting online. Also managed to ask our friend Charles for the voice-over narrations. I’m quite happy that we managed to finish on time!

The next film project was Dr. Seet’s talkshow – An Audience with Dr. Seet. Dr. Seet is a NUS TSD Lecturer and he has this idea of doing a talkshow in the form of online short 3-5mins video cast. As he has many connections in the Theatre scene, it will be mainly about theatre and will be uploaded on fifo.sg. He kindly engaged nuSTUDIOS help in terms of filming, and we managed to get together to do a pilot shoot last Saturday. The venue was a small little room in Action Theatre. Originally, I thought we will get a black box kinda room or something, but in the end it was this little room which was quite crammed. Nevertheless, we managed to make the full use out of it and created a talkshow set inside! Sab bought a nice huge grey cloth (which is a neutral colour and acts as a good backdrop), and we got props like sofa, coffee “table”, lamp and a plant from the office upstairs. Together with the lights, the set looks pretty professional! Here’s a sneak preview: 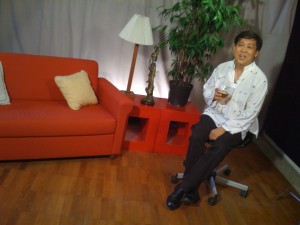 It was a pretty long shoot, and we got to see stars like Nelson Chia, Lorretta Chen and much more. It was quite a fun process, since it’s our first time doing this. All in all, we shot 4 episodes, and look out for them to be finished and uploaded soon!