Since secondary school, I feel that I am living in this box, which constrains our creativity and imagination. It is the box of competition, of the academic driven lifestyle, of continual assessments, tests, exams and ‘<insert the alphabet here>’ Levels. In this box, most of the things we do in school have an end in mind: exams. Everything else must be put aside, your CCA, your hobbies, your piano lessons, your taekwondo lessons and what not. Exams are coming! Must start doing ten-year-series, otherwise you would not know what is coming out. Then die! Hundreds of your friends are studying the same book. If you don’t study, you will lugi. Because the same question is very likely to appear again! Then you will have no competitive advantage over the others! Then you will lose out and score badly! Then cannot get to a good school, cannot get to the ‘school of your dreams’.

In junior college, the box gets even more stifling. Two years, cram. Then wham. A little bit of time for your orientation games and what not. But then reality soon sets in and you have to start studying. Otherwise you won’t be able to go to a ‘university of your dreams’.

And then I thought, going to university will finally get me out of the box. Because finally, in university, you get to study what you like, and hopefully there will be less exams and more projects that you are interested in, instead of studying for the sake of studying. But I was wrong.

On the contrary, for some of the modules, the box is exactly the same. Cram. Wham. Mid-term tests. Exams. And oh, there are ten-year-series too. Just that irritatingly, there are no friendly answers provided. What? No answers? Then how to study? We got all the questions with no answers. Nevermind lah. Just keep whacking the questions. Do a thousand times, discuss with friends, until you get them right. Especially those mechanical ones must get right. Otherwise you will be pushed down the bell curve. Because everyone is expected to get those questions right. Projects? What projects? 10% only, what difference does it make to the total marks? The bunk of the marks still come from your exams. Why spend so much time on your project when its weightage is negligible in your final grade? Faster download the past year exam papers. More important. Quick quick, only have one week left to study. Oh, module over? Okay, let’s forget everything that I studied. Kinda useless anyway for next semester since I may not be using it anymore.

I sure hope that my higher level modules have less of the box. And more out of the box teaching and examination methods. No exam is good as everything is based on projects. Just like NM2208. I love it a lot because I do not need to cram anything for any exam. Excellent. Finally, I am out of the box.

The Singapore education system seriously needs to move away from the notion of exams. Singaporeans are trained in ten-year-series, and without them, it seems like we cannot survive. (Except for the super smart ones)

On monday I had a sore throat. On Tuesday, temperature was 37.3 degrees. So I decided to go to the polyclinic to see a doctor. It was like a war zone, with red and green zone for flu and non-flu patients. I was in the red zone, and everyone has to wear a mask. The doctor diagnosed me with a cold and give me some sore throat lozenges and panadol.

Went to school as normal. On Wednesday night had a runny nose. Was quite bad as I was perspiring (due to Panadol), yet I feel cold because of the cold. However, there was no high fever yet. On Thursday, it was 37.3 degrees again. I went to see doctor in NUS, but when I reached there, I didn’t have a fever as temp was 36.9. He gave me some runny nose tablets. Before I went for lesson, I took my temperature again. The temperature shot up to 37.9. It was then I decided that I should go straight home right now.

Maybe I’ve been going out too often, perhaps my body just wants me to rest at home. It’s good to be at home without any worries or things to do. That’s what holiday is about, isn’t it? (Although I still have a lot of things to do…)

I wanted to write this for a long time. So here are top 5 reasons why you should switch banks:

So why wait? Take some time to go over to the other side to set up an account, transfer all your money over, and start enjoying the convenience.

(No, UOB is not paying me for this post.)

However, I have a comment to make. I wanted to ask the bank to help me sign a form for student exchange programme application. The UOB person said they do not sign such documents, but instead I have to pay $20 for a certificate of statement. So I went over to POSB and tried my luck. The person asked if I needed the letter statement which also cost $20, but he was also willing to sign the form for me at no charge. Ah, that’s when it is good to have 2 bank accounts. Haha.

My friend says my blog is getting rusty. Well haven’t updated for almost a month. So busy that I’ve to type this on the train haha, thanks to my iPhone which has now been upgraded to 3.0. Finally can forward SMS and copy and paste! However I faced some glitches while upgrading and steve jobs said “npehea” to me (some Russian language).

Last few weeks has been a wham boom bang busy time (lol). My first special term results are out, and as with all other math related subjects, I’ve got a B. However I was quite disappointed with myself as I got more than 30 mins to solve the last question and I couldn’t. Shows that my left brain isn’t working as well. My lecturer Stephane Bressan gave an interesting quotable statement: “Math is not the problem. It is like a doctor who helps you solve your problem. You don’t blame math for your problems just like how you don’t blame the doctor for your sickness. When we are faced with problems, we just have to apply the rules of Math.”. Well think I can’t apply those rules that well.

Currently my brain has switched frequency to my right brain, and I’ve been doing designs on my tablet for NM2208 Principles of Visual Communication until my butt hurts lol. Check out my design blog. I think I prefer such “right-brain” modules and the best part is there are no exams at all – everything is from weekly assignments. Which is fantastic cos means I don’t have to mug like siao. Uni life should be like this! Sometimes I think I should have studied art instead. But it’s okay I should make the best out of my opportunities now, such as scrambling to apply fo student exchange. It is noteworthy that my faculty office actually forgot my application. Luckily I decided to email them one fine day. Now praying that my module mappings can work.

In other events, there was Celebrating The Family, a four-session screening event by nuSTUDIOS of CASHLESS and In Your Own Words.. I was the moderator for 2 of the Q&A sessions. Actually I didn’t do anything much, since most of the talking was by Derek and Melinda. Nevertheless it was still a fun time especially the last night when the actor came and there was much chatter with his company colleagues. Some of my friends and Whit came too. Someone asked me when’s my turn to make one and have a screening…well maybe next time soon….

I also went to CommunicAsia/BroadcastAsia. LG and Samsung had huge booths facing each other, and the former was giving out cubes to promote their cube interface. Frankly, their icons are an iPhone rip-off, and the cube thing is just a marketing gimmick. Samsung’s Jet was a bit overhyped, but the i8910 HD running on Symbian seemed pretty good as it can record HD video at 1280×720.

Video Games Live was awesome. I especially liked Sonic, my favourite console game, as well as Super Mario. Martin Leung performed the medley blindfolded on stage, as well as the catchy Russian folk song for Tetris. You can watch a video on YouTube, his hands move super fast! (*kowtow*) There was also a cosplay competition in which someone dressed up as a Patapon along with a weapon, but couldn’t see his face, won. (At that time I do not even know what is Patapon!) 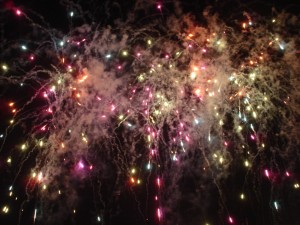 I also went to the closing event of Singapore Arts Festival: Crackers, a fireworks performance at yishun with jr and the rest. The introduction was a bit long and draggy but the fireworks was cool as they were exploding in-your-face and all around you in a circular fashion. There were also windmill and flying around kinds. Pretty cool. The ushers were quite cute too, as they wore yellow helmets and gave a safety briefing a la airline style.

Soon after was SoC Camp Castello which is the main highlight of the holidays. Somehow due to my friends preference for us to be in the same group, I was made the main OGL of Sir Kay Knights (SK9) with Steve as assistant OGL. It was a daunting task, especially when you have a weird group name and others said it’s gay. Haha. We went to buy cloth from spotlight and cut into bandannas, inspired by VJC’s. We then drew patapon-inspired K-figures on them, each with different weapons. Haha. My group turned out to be surprisingly awesome (as compared to other camps in which other groups always seemed to be better than mine). We had excellent freshies and OGLs who worked great in a team and in games and we managed to win 2nd in the ultimate race (with some people calling me colin.sg) and tailing behind the best group in most of the activities. Moreover, we even had the best male freshman in our group and we won tge best skit thanks to our creativity of merging LOTR, Batman, Patapon and L4D together. Everyone had a great laugh especially the gamers in the audience. Overall, I am very satisfied with my group and I hope my freshies are as satisfied with us for providing good welfare (such as buying ice cream and jelly pudding =p). I hope I did a good job as an OGL. Kudos to everyone!

With so many assignments to do, I am left with not much free time for myself. Combined with all the nuSTUDIOs activities and various meet ups I reckon my holidays will be over soon.